Busy June for Glass Engraving, Back from holiday and on a diet! 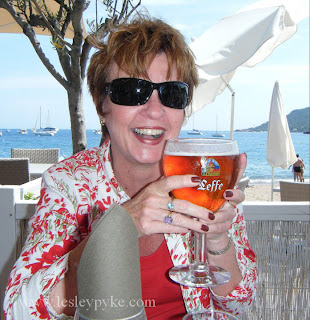 Goodness knows why the waiter decided I needed a large one??!
Well I am back from the French Riviera, (sound so snooty but it is not I can assure you, it can be done very reasonably) , what a lovely relaxing time we had. Weather was gorgeous despite some scary forecasts, but any heavy rain was short lived. I could live there tomorrow! So I have lots of work on the go , hit the ground running as it were. Amongst some smaller items to engrave I have the annual East Anglian Air Ambulance golf day which is always a stunner, I always play in it too and just make it as the grass pollen season it just about finished and my eyes struggle a bit out there...best I keep my ball OUT of the long grass then hey!!
It is amazing that the government does not aid air ambulances and they run on donation only, abysmal...shame on them! 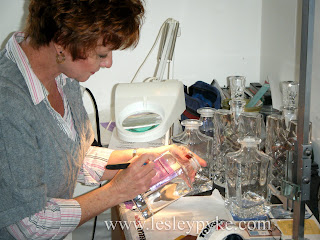 So before I left for France, of course I had the Spexhall golf prize table to do (see last blog entry) and here are a couple of pics of me preparing the glass for sandblasting. 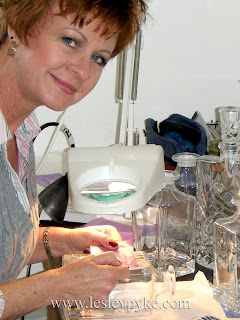 A smile for the camera !!...it is better to watch what you are doing though :-) The mask which I have made must stick down along a parallel line I have already marked on the glass and must be central too! I use magnification which makes life much easier, nothing at all to do with being a grandma now!! (Mason has just started crawling BTW) 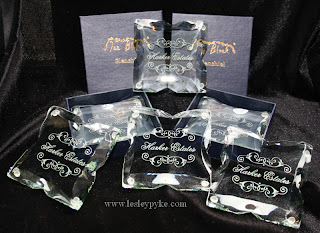 Practically moments before I left for holiday I had an urgent request from a regular customer of mine in Canada, can I engrave and send 6 drinks coasters, which had only a few days to get there before her dad's birthday, of his wine label, the panic was on but all completed and was sent on time and arrived JUST in time, all's well.Whew!...but I do love the satisfaction of a plan coming together. 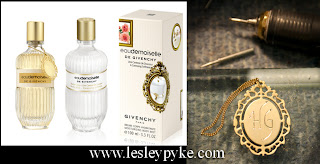 Of course as I mentioned last month, I was about to head off to Harrods for a stint with Givenchy, engraving for the launch of their new perfume Eaudemoiselle , that was very successful and of course great fun. From the feedback I have received it was a hit with the customers, I know it was crazy busy from start to finish. The engraving was by hand on a small metal medallions which hung around the perfume bottle, so gorgeous! I was engraving initials only. We were situated in the front of the main "Black (perfume) Hall" in a spectacularly elegant looking stand!

The challenge with these sessions is of course being able to design a monogram in seconds by hand and engrave it quickly and neatly with people watching, often the customer waiting to get to his expired parking.....with people wanting to talk to you and whilst wearing the very unflattering headband magnifiers and trying to look perfectly gorgeous and un flustered throughout, just like all the beautifully groomed staff there. Meanwhile you feel like both your eyes are in the same socket and you think your face looks like a fright, but it doesn't really. With train and underground there is 6 hours of travelling with the 8 hours of engraving in the middle. I am always like a complete zombie when I get home and that was a day before we left for the airport hotel before flying on holiday the day after. I would like to say a big thank you to dear Raphaelle and all the Givenchy staff who were amazing and for this opportunity and of course Harrods once again for just being fantastic as usual!

OK so I am back in the land of engraving now and amusingly (not!) my first day back on Wednesday, I walked it and turned on my PC which just looked at me blankly.....nothing doing! My old UPS had decided to stop working, "drat" said I and had to unplug the mixture of wires and cables and find the cables that go into a normal plug...from the cupboard full of arbitrary cables we all have, where they seem to reproduce themselves and goodness only know where they all belong, but I seem to have what looks like a plague of snakes and they are all tangled???
I managed to find what I wanted and had to immediately order (more expenditure) a new UPS which amazingly arrived the next morning 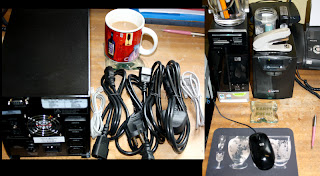 ....and I now have it all plugged in again. All for that 5 minute grace period where you can save and shut down at a safe pace without losing any work, during a power cut...yes we do get them from time to time and it IS worth it! I will give this place a plug at the end of the page because they are great.

To end I would like to mention that an old friend of mine has just this week lost her battle against breast cancer. It has been a very sad time, sad sad, just so sad. I had not seen her for years, we are both from Zimbabwe. We were planning to meet up somewhere after this last treatment, she lived quite far away, so now we never will. It is hard to realise when you are in the thick of things, work mainly, wrapped up in our own lives, that there are some things that need our attention, some people that need to be seen, visited, shown how much you care. I needed to see Karen, I really did. RIP my friend and God Bless her dear hubby and daughter.

BRAVO Lesley ! J'ADORE !
Keep on showing up your passion as it helps and motivates me. You're a GREAT ARTIST Leyley.
Claudia Laidet

Promote Your Page Too